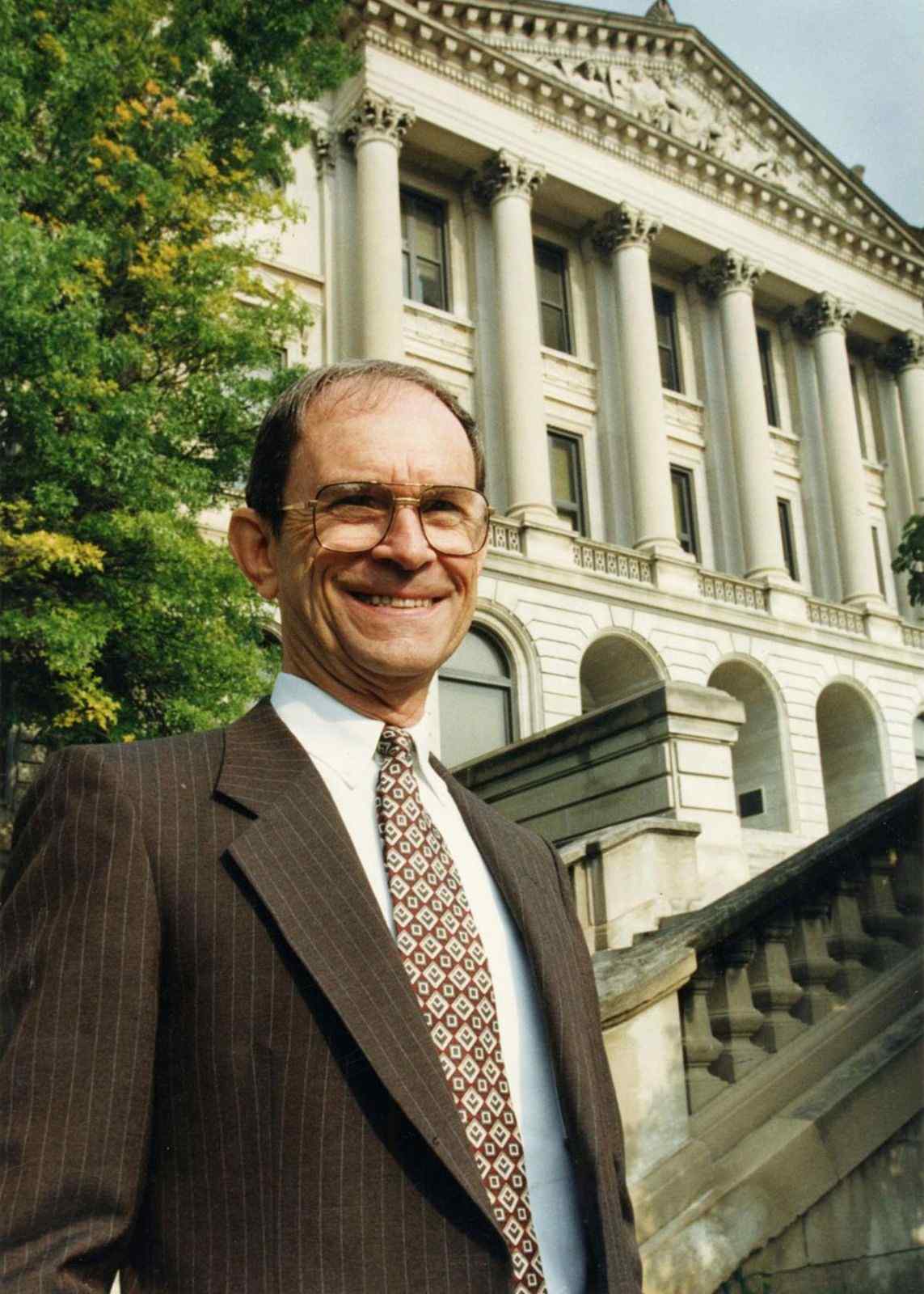 On November 6, 2019, former students, colleagues, friends, and family of the great G.E. “Doc” Moller gathered for a special 90th birthday celebration hosted by the Central High School Foundation. This party, although very celebratory, also felt slightly somber. This is because it was held in lieu of a memorial service: Doc, the longest-serving former principal of Omaha Central High School, passed away two months before on September 10, 2019.

“He was a very humble man,” said his eldest daughter, Londa Claxton. “In the weeks before he passed, he told us that he didn’t want a memorial service. He did not see himself as extraordinary, like others saw him. He believed that everything he was known for – his dedicated service to Central, his excellence as an educator – was just his job; his responsibility.”

“He was so adamant about not wanting a memorial service that when the Foundation approached us about hosting a celebration of life on what would be his 90th birthday we were like, ‘what would Dad think?’” laughed Risa Hofmeister, his younger daughter.

When Doc became principal of Central High School in 1968, Nebraska’s largest and oldest high school already had a long tradition of excellence, a strong college preparatory curriculum, and exacting standards for all of its young people. When he entered his role, however, he pushed to set the bar even higher.

“He knew his stuff,” Dan Daly recalled for the Omaha World-Herald in 2019. Daly spent many years as an English teacher at Central, and recalled his professional experience with Doc as an example of how he set the bar high. Even as a veteran teacher, Principal Moller would still frequent his classroom for regular observations. He would then provide an in-depth written evaluation that would, according to Daly, make you a better teacher.

Dr. Keith Bigsby, who taught under Moller and later served as principal of the school, said that during his tenure every student knew they were expected to work hard. And teachers knew those standards applied to them as well: punctuality, assigned hall duty, and well-prepared lessons were all mandatory. If you happened to be late to work, many recalled that they could expect a “Moller-gram” – a typed note on the back of a used sheet of paper he cut into fourths – in their mailbox the next morning, reminding them of the standards.

“Moller-grams weren’t just for the bad stuff,” recalled Risa, who spent many hours at Central High School with her father. “It was like he saw everything! You could expect a Moller-gram for good stuff too.”

“He believed it was his job to see what was happening around the school,” said Dr. Bigsby. “He called his management style MBWA – management by walking around. He didn’t believe in just hiding in his office. He wanted to be a present figure in the lives of the students.”

And he was known as just that: a present, strong, positive figure in the lives of students for the 27 years he served as principal of Central High School.

“He wanted those kids to succeed and he fought for them,” recalled Risa, who said she often went with her mother and father as they attended nearly every single Central sporting event throughout the years. “They knew he loved them, and they felt that.”

As an educator, Doc felt that it was important to know the name of every person in the school. “He always knew the students’ names,” recalled Londa. “It was very important to him. And if he didn’t know someone, he would come up with a reason to invite them to his office to discuss anything with them so he could get to know them.”

“Doc” Moller earned his nickname as a kid growing up in Alliance, Nebraska – long before he actually became a doctor. He started his career as a teacher in 1954, teaching English, history, speech, and journalism in Valentine, Nebraska, before he earned his doctorate degree in education from the University of Nebraska-Lincoln. He then served as principal in Gering, Nebraska, before moving his wife, Betty, and his two daughters to Omaha to serve as assistant principal at Central under J. Arthur Nelson in 1963.

Londa said as they were growing up, their Dad’s dedication to Central was a whole-family dedication. Their home was often host to many Central students for dinner, as well as friends of theirs from Burke High School. “There were kids in our house all the time. They were always welcome, and they were always wanted.”

Londa said that their mother, Betty, who was a registered nurse and stay-at-home mother, was also an enthusiastic supporter of Central throughout her husband’s career and years after. She encouraged his dedication and picked out his suits for him each day of his career, Risa said, because her father was color blind. “I also remember clear as day,” she said, “them sitting up for hours working together on the schedule for the new school year.” (Back then, the whole school’s schedule was posted on large boards that hung in the hallways.)
“Mrs. Doc – how we addressed Betty when we saw her at Central – was at every single game, competition, and event at Central,” said Dr. Bigsby. “She was an essential part of the Central community.”

Doc’s dedication to Central was unmatched. During his tenure, he took great pride that each year at least one Central student earned a National Merit Scholarship. And in 1989, a national education magazine included Moller on a list of the nation’s top 100 school executives.

During those 27 years, Doc also witnessed a lot of change as the world evolved around his beloved high school. Risa and Londa both remember his time as principal during periods of racial unrest and said, “He was trying to impress upon his students a sense of unity.”

But what they remember most from those challenging times was his insistence to step into that work rather than step back from those opportunities for learning. “He never hesitated to be where he needed to be during those years. You could count on him to show up,” said Londa.

Moller assisted in the efforts to establish The Central High School Foundation before his retirement in 1995. He was responsible for launching the Foundation’s endowed scholarship program, which now awards more than $170,000 annually in scholarships to graduating seniors. One scholarship is even awarded in his name.

During retirement, Doc spent a lot of time with his family and found new joy being around his grandkids, great-grandkids, and in the offices of Risa’s physical therapy business. For 10 years, he also worked for the University of Nebraska-Omaha as a clinical instructor for students who wanted to become administrators.

Betty and Doc loved to travel and were active in retirement until she passed away in 2016. Their daughters said she loved attending Central High School Foundation events, such as class reunions and the Hall of Fame, and held a deep love for Central until the end of her life.

Only three months before he passed away, Moller attended a ceremony where the Central High School Foundation dedicated in his honor the Dr. G.E. and Betty Moller Legacy Walkway. This generous gift was donated by the Class of 1995.

“When he found out, he was very overwhelmed and humbled,” recalled Risa. “He didn’t believe he needed recognition. He thought he was simply doing his job.”

“To him, he met the standards,” agreed Londa. “But to everyone else – everyone who witnessed the extent to which he would go – he went above and beyond.”

The day after his passing, a bouquet of flowers rested on the bench of the main walkway under his name; his high school looming quietly and stately in the distance.